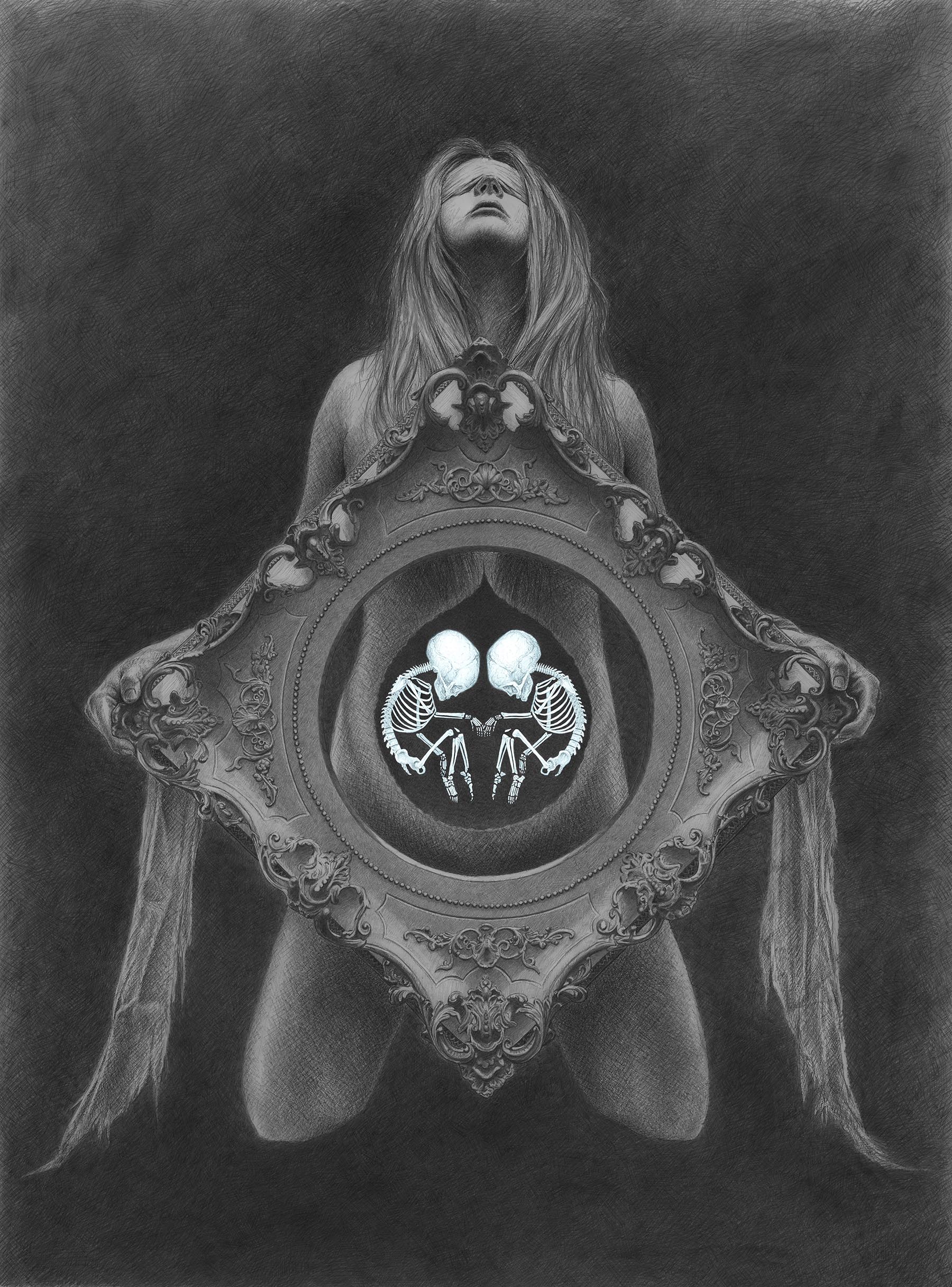 Penn’s “Nucleus” series is the synergy that links all of his artistic concepts and personal history together into one impactful body of work. Taking the cast glass skeletal elements from “Inner Light” and the ornate frames from his “Rebirth” series, ”Nucleus” highlights a fusion of artistic inspirations that combine to create a shockingly beautiful message.

Inspired by the arrival of the artist's first child, “Nucleus” depicts his pregnant partner holding an antique frame that his grandfather, who was a master picture restorer, had once restored. The frame is positioned so that it highlights his next generation.

Within the circular opening of the frame are the exposed cast crystal glass foetal skeletons of a male and female child. The skeletons represent life and death with the glass acting as a metaphor of the fragility that our future generations could face as a species if we do not reverse our negative anthropic actions.

The circular composition of the frame symbolises the protective membrane of a cell with the mirror imaged foetus acting as the nucleus and the dividing cell as we grow. We all begin life as an individual cell, and as we divide we evolve one step closer to becoming part of the planet as a conscious human being.

The hands of the foetuses touch at the mother’s naval, the life giving junction in the protective womb. This juxtaposition of life and death is the focal point of the artwork and its most poignant message.

Set in an anguished pose on her knees the mother exudes the worry’s she has for her children’s future. The torn canvas that blindfolds her once would have adorned the centre of the frame and now shows how we are bound by our actions and blinded to the uncertain future our offspring now face.

The first “Nucleus” rendition is from Penn’s carbon works, a conceptual graphite and charcoal drawing that is embedded into an innovative frame / bespoke lighting installation. Penn’s tailored system illuminates the skeletal elements of the carbon work, this unique way of displaying a drawing fuses the aesthetic that Penn’s cast crystal glass sculptures showcase with their own internal illumination, and hints at the sculpture that will derive from this piece.

Whilst a complete series of carbon works are being created for “Nucleus” the artist will sculpt and fabricate a 6 metre tall rendition of “Nucleus” out of bronze and cast crystal glass. This sculpture will be the impact piece that will showcase the concept's inspiration: the artist's own history and the imminent launch of the Fragile Fight project.

“Nucleus” will launch Penn’s Fragile Fight project using the human form and its fragility as the inception for the projects message and ethos. “Nucleus” highlights how fragile we are as a species as well as the animals that the project is highlighting and working towards protecting.

Will the next generation paint our future and fill the frame with positive depictions of our species and our evolution, this is the unanswered question “Nucleus” asks of the viewer.